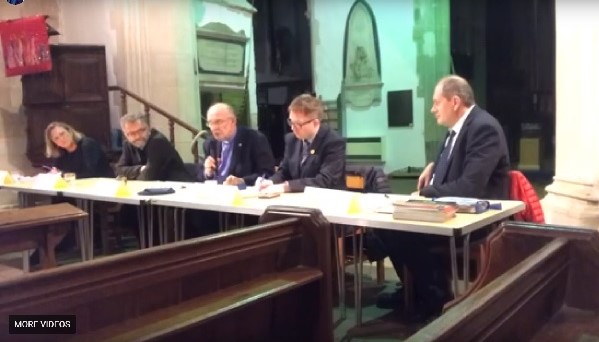 As usual at election time, the candidates were asked to present themselves to their electors at a hustings. This time, there were two. The first was organised by the climate emergency action group Extinction Rebellion, and took place in Hastings on Friday, November 22. Three of the four candidates standing for election in the Hastings and Rye constituency took part, namely Peter Chowney of the Labour Party, Paul Crosland, Independent and Nick Perry, Liberal Democrat. Sally-Ann Hart of the Conservative party declined to come, her agent citing safety concerns.

The hustings meeting was full to capacity and the discussion focussed on what the candidates and their parties (where relevant) would do to address climate change. The atmosphere was collaborative, friendly and informative. While many people went away wishing that more could be done, it was clear that climate change was a big concern for everyone in the room.

Extinction Rebellion is a global environmental group which explicitly eschews violence in making its arguments to address and halt climate change. It has a diverse group of supporters including medical staff, small business owners, civil servants, shopkeepers, religious leaders, students, creative artists, office staff, ex and serving police staff, manual workers, parents, children and many others, from all walks of society, across the world.

The second hustings, this one in Rye, was organised, as has become traditional, by Churches Together and was held in St Mary’s Church on the damp evening of Tuesday, November 26.

This time all four candidates turned up to answer a diverse array of questions on subjects ranging from local transport (including the inadequacies of the Marshlink line), new homes built on the flood plain, affordable housing, travel in the EU after Brexit, pension age changes and which way did the candidates vote in the Brexit referendum.

By and large, everyone stuck to their respective party lines, kept more or less to their time limits and this year, unlike 2017, had virtually no barracking from the audience. If the answers were, at times, a little predictable in the way the main party candidates reeled them off, this might perhaps be attributed to the Labour and Liberal Democrat candidates both being old hands at this, having survived several previous elections and hustings, whereas for the Conservative candidate, it was a newer experience and managed to bring forth an indication of the intensity of her belief in some of her answers.

With only two weeks to go until a general election, regarded by many of the politicians themselves as the most important that most of us will have ever taken part in, we have spoken to all the candidates on neutral territory – The Mermaid very kindly lent us the Boardroom there for the purpose and our grateful thanks go to them for this.