On Sunday, September 20, the volunteers at Pett Level Independent Rescue Boat (PLIRB) received a visit from Member of Parliament for Hastings and Rye, Sally-Ann Hart.

The charity recently came to the attention of the local MP when The Times / Sunday Times produced a Behind The Story documentary video, which included segments from both Sally-Ann Hart and Steven Hill, launch authority of the PLIRB. The video highlighted some of the work undertaken by the rescue boat, including an emergency call-out during the recent main lockdown period.

Thankfully for distancing requirements, the weather was good, so a general meet-the-team took place outside the PLIRB boathouse at Pett Level. The MP was introduced to the members of the working team who were present, and took the time to discuss local issues. The problems the self-funded charity are having accessing grant funding as a result of the pandemic and lockdown were also discussed.

“All our lifeboats, both RNLI and independent, are vitally important to our coastal communities and it’s vital they get the funding they need.” Sally-Ann acknowledged. “Pett Level Independent Rescue Boat is a local organisation, staffed solely by local volunteers who are passionate about saving lives – and they’re doing a fantastic job.”

Helmsman, launch authority and training officer, Darren Barry then gave Sally-Ann a tour of the charity’s facilities, including the base, boathouse, rescue boats and support vehicles. During the tour, they were able to chat about the PLIRB’s work alongside other emergency services and organisations, for instance during multi-services incidents and for shared training. 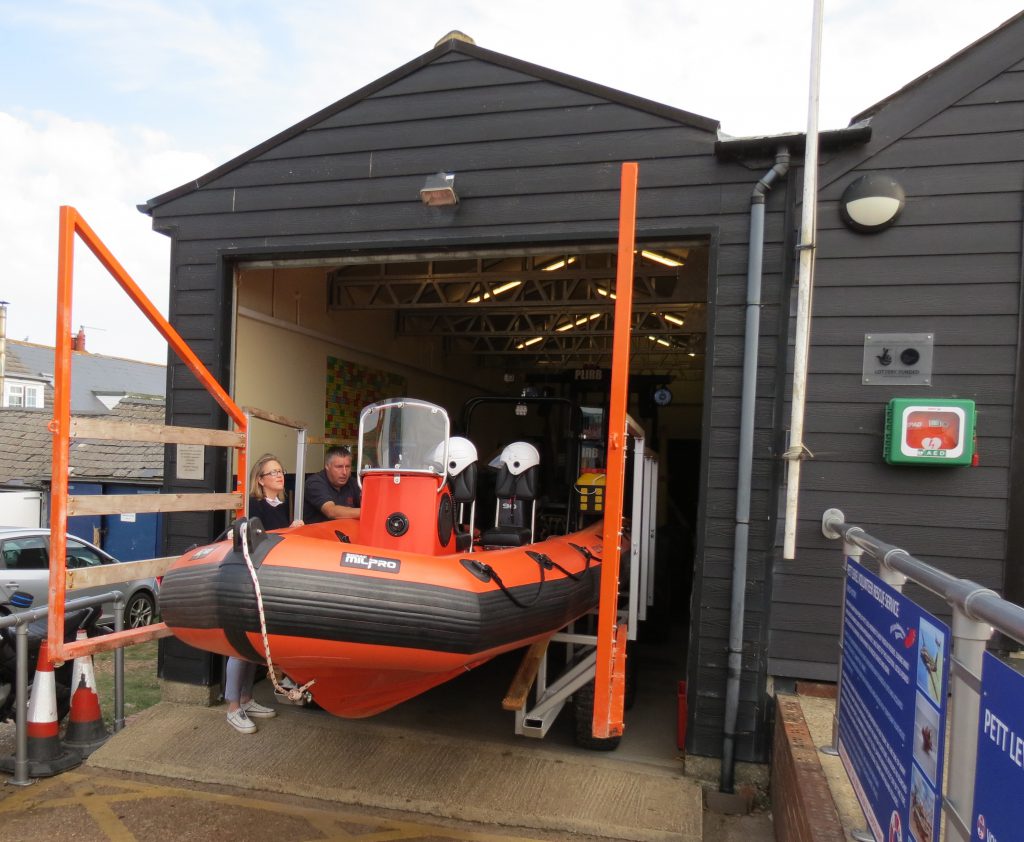 As a parliamentary representative of a coastal community popular with visitors, Sally-Ann was delighted to hear about collaboration between services, saying that “collaboration between the RNLI and independent rescue boats is vital in ensuring the safety of people visiting the area.”

And of course, on such a sunny day at Pett Level, Sally-Ann was also able to see first-hand the number of visitors the area attracts and to identify some of the ‘hidden’ work of the charity, such as providing first aid assistance when the boathouse is open as well as raising visitors’ awareness of beach safety in general, and the specific safety risks on local beaches. These include risks such as rock falls along the cliff line, submerged hazards and the notoriously fast incoming tides that frequently catch visitors out, resulting in people being trapped on the rocks, sandbars or at the bottom of the cliffs.

Before leaving, Sally-Ann also spent time chatting to Barbara Martin who runs the charity’s open air bric-a-brac charity shed, alongside the boathouse. This stall usually raises at least a quarter of the charity’s £10,000 running costs each year. However, due to lockdown and currently being unable to receive donations of items to sell, income from the stall is seriously depleted for 2020.

“Along with lots of other charities this year, we’re struggling to raise funds to cover our operational costs so it’s heartening to know that Sally-Ann Hart recognises not only this problem but also appreciates the efforts of our volunteers in keeping visitors to the coast safe.

Sally-Ann’s visit highlights what Pett Level Independent Rescue Boat continues to do during these worrying times, and may hopefully help raise awareness of our charity’s work, of the costs involved in providing these life saving services and of the impact the pandemic has had on our ability to raise the money we desperately need so we can continue provide these services.”

If you would like to know more about Pett Level Independent Rescue Boat, please visit plirb.com.