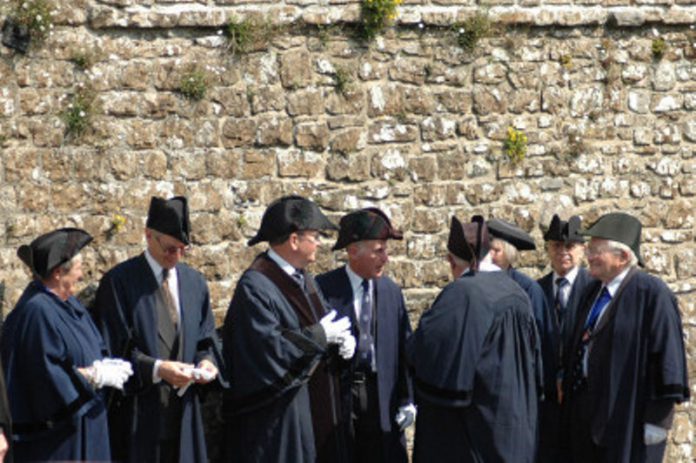 For those unfamiliar with the customs and usages of Winchelsea, it perhaps needs to be explained that, in contrast to Rye and the other Cinque Ports, the mayor in Winchelsea is not elected by the populace.

He is instead picked by the other members of the Winchelsea Corporation, a body whose membership never exceeds thirteen, plus a handful of typically non-resident ex-members. And none of these people is elected either. They were instead all co-opted by existing members to fill dead men’s shoes.

Some Winchelsea residents say the mayor-making and the Corporation are traditions and therefore deserve to be preserved. The Corporation itself boasts that, together with the City of London, it is the last unreformed Corporation in the country.

Other residents argue that Winchelsea’s history as a Rotten Borough is nothing to be celebrated. And they ask why the Corporation, a body that has had no civic function since 1892, is kept on life support.

Supporters point to the Corporation’s responsibility for the medieval Court Hall and town gates. But opponents riposte that these ancient monuments have been badly neglected by the Corporation and, when work is eventually done, it is largely publicly funded.

Of course, any occasion on which thirteen clearly embarrassed elderly men and women appear in costume is ripe for satire. Last year, Winchelsea’s mayor-making was parodied in a YouTube video, “The New Mayor of Winchelsea”.

In a sub-titled scene from the film “Downfall”, Hitler railed against the unfair process of electing Winchelsea’s mayor (having been foiled in his attempt to become mayor and relocate the Third Reich to Winchelsea).

It is understood that, this year, a CD is about to be released featuring songs about the Corporation from this year’s anarchic Winchelsea Mummers’ Play.

Another source of controversy about Winchelsea’s mayor-making is the attendance list. Few residents get invited to either the ceremony or the reception afterwards.

On the other hand, it has been claimed that the mayor-making is the only occasion, other than canvassing visits during election year, on which County Councillor Keith Glazier is seen in Winchelsea. Cllr Glazier denies this allegation.

Last year saw the attendance for the first time of the MP, Amber Rudd. Her predecessor, Labour MP Michael Foster, was a devoted attendee.

Although asked for comments on why she attended a celebration of an institution which disenfranchised most of the local population, she had not responded by the time Rye News went to press.

Perhaps, the last word can be left to the pre-Raphaelite, Dante Gabriel Rosetti, who visited Winchelsea at Easter in 1866. He was somewhat surprised to see a costumed procession making its way through such a small village of “pleasant doziness” and commented that this civic spectacle was “observed by a mob of one female child in the street and by us from the inn window”. If you are in Winchelsea at about noon on Easter Monday, come and join the mob.