There will be few of our readers who have not yet heard of the resignation of our MP from her cabinet post and her surrender of the Conservative whip.

She has since written an open letter (below) to her constituents. 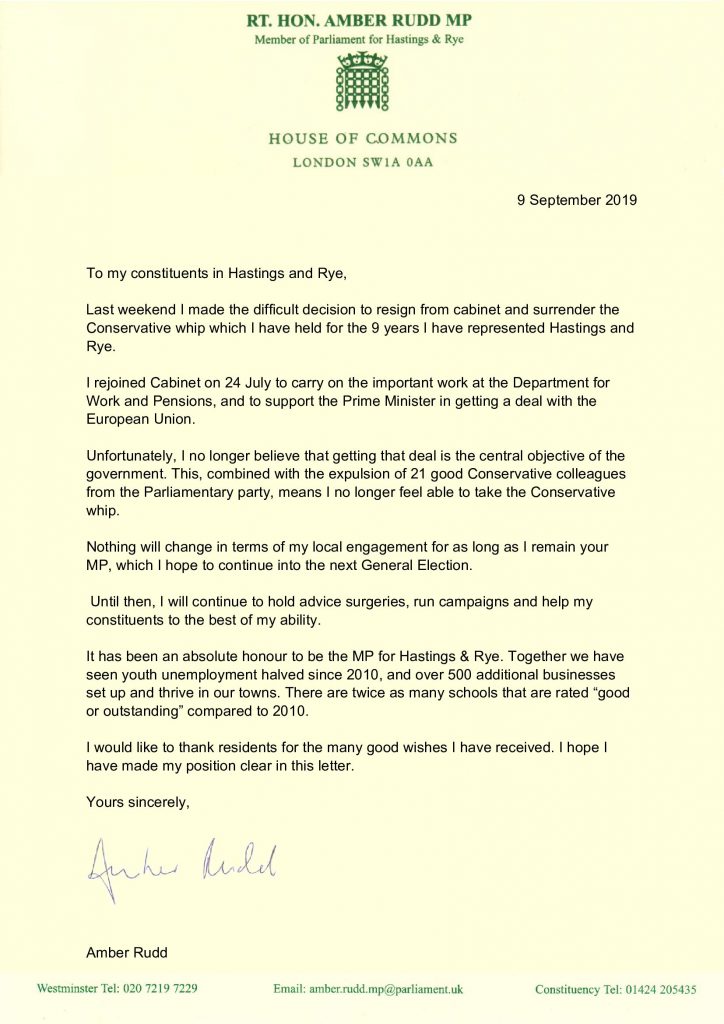 As things stand at the time of writing (September 11), and should there be an early general election, Rye has, at the moment, three candidates who have so far thrown their hats into the ring:

Labour: Peter Chowney, leader of Hastings Borough Council and who supports ‘Remain’, although the constituency, as a whole, voted to ‘Leave’. His party leader now says that Labour should not give preference to either side during an election, but negotiate new terms after the election with the European Union about the basis for “Leaving” – and then have another referendum.

Liberal Democrat: Nick Perry, lived in Hastings since 2007, practises as a mental health professional. He was last spotted at a LibDem party in Winchelsea recently. He supports his party’s position to remain in the EU.

Brexit Party: Tom Bewick, former Labour councillor for Brighton and Hove who left Labour for the Brexit Party citing antisemitism, Jeremy Corbyn and Brexit as the reasons. He chaired the official Vote Leave campaign in Brighton and was close to the Blair government. His party’s position is to leave with no deal.

The local Conservative situation is unclear. Amber Rudd is, at the moment an independent Conservative and she has stated (see letter above) that she will continue to serve the constituency until an election . Her view on Brexit was to acknowledge the referendum result and leave with a deal, if possible. She does not wish to divide the Conservative vote at the next election and has confirmed that she will not be contesting the seat. Rye News has asked the Hastings and Rye Conservative Association about the selection of a new candidate, but so far there has been no comment

But nothing to do with Brexit is simple or straightforward.

On September 11 the Court of Session in Scotland ruled that the prorogation of Parliament was unlawful. In London last week a judge declared that the advice to the Queen to prorogue was political and did not come within the jurisdiction of the courts. That decision is being appealed in the Supreme Court next Tuesday and their decision will trump that of the Scottish court. A lot depends on the result.

If the court rules against the prime minister, Parliament could be recalled and there has already been a call from one of the Tory old guard for his resignation.

So why is Rye News discussing all this? Because it could affect us greatly.

We have, at the moment, three candidates as mentioned above: One wants OUT with no deal, one wants IN regardless of the referendum result, and one represents a party that wants IN….or possibly OUT, but wants a general election first. The missing option so far is OUT but with a deal if possible. This is likely to be the position of a Conservative Party candidate.

Of course, by the time we publish next week, everything could have changed . . . again.