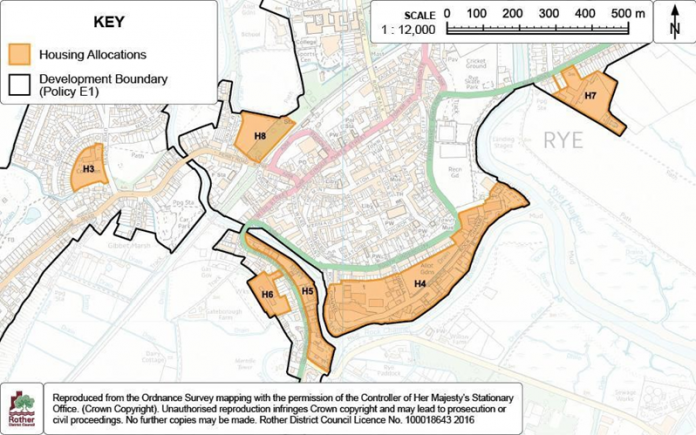 As previously covered in Rye News, the Rye Neighbourhood Plan is out for consultation. Coming in at 108 pages, it’s not the easiest of reads but thankfully it has plenty of maps and photos.

As a keen allotmenteer one map took me by surprise (main image above). It shows the whole of Rock Channel earmarked for housing – including what is currently the very popular allotment site off South Undercliff.

While reading through the Plan it becomes clear that it was a mistake to include the map and that the allotments are to be retained but our concerns of being thrown off our allotments would not be wholly misplaced. Rother District Council developed its own plans for the South Undercliff allotment site in 2007 which laid out a number of options, including comprehensively redeveloping the allotments with housing.

To avoid confusion, and bearing in mind we will be asked to vote on the Plan at some point in the future, I would recommend that the planners clarify their plans for South Undercliff’s allotments and replace the map with the one that is also contained in the Plan (see below). As Rye’s planners previously found when they earmarked Gibbet Marsh for a supermarket, people are very sensitive to loosing green space to development, especially when there is a busy and polluting A259 outside the front door, as the residents of South Undercliff have to contend with. The allotments to the rear of South Undercliff are an oasis of calm. Replacing the map to achieve greater clarity would cause a lot less confusion when we come to vote on Rye’s Neighbourhood Plan in the future.