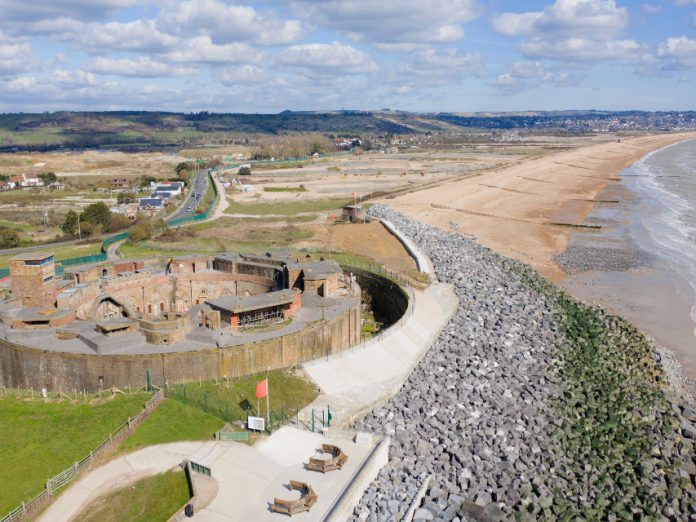 During 2020, the Environment Agency with several partners, including the Ministry of Defence and contractors Van Ord and Mackley, completed work to improve the flood defences from Hythe to Folkestone. This is a further stage in the protection of the coast between Folkestone and Fairlight and so far has cost £130million. Many will have seen the completed projects at Broomhill and Dymchurch.

The Hythe stage helps reduce flood risk to 787 properties and the important Ministry of Defence firing ranges immediately behind the beach. Work started as the Covid-19 lockdown began and has involved refurbishing the timber groynes, placing rocks imported from Norway to reinforce the revetment around the Dymchurch redoubt and recharging the shingle beach with dredged gravel.

The project incorporates several features to enhance bio-diversity, such as man-made rock pools and rope wrappings to attract sea weed colonisation. There are more details here.

Mark Douch, a local area flood risk manager at the Environment Agency, has said that: “Most of Romney Marsh is below high-tide level. It’s these defences that keep the sea at bay. If we didn’t have them we would see tidal flooding across most of the marsh of a depth between 1 to 2 metres, which as you can imagine would be absolutely devastating.”

Completion of this phase of the work was marked on Friday, March 26 by a virtual event on Teams, which brought together speakers from the Environment Agency including the national chair, Emma Howard and regional director Sally Harvey, and Martin Hurst, chair of the Southern Regional Flood and Coastal Committee.

John Gower of the Environment Agency introduced the video and Lt Col Richard Bishop, Ministry of Defence, and Damian Collins, MP for Folkestone and Hythe, also attended with some 56 other interested parties, many from the Southern Region Flood and Coastal Committee.

During the meeting, the Environment Agency underscored its strategy for Romney Marsh. It plans to manage flood and erosion risks along the coastline over the next 100 years, taking the predicted impacts of climate change into account.

Work now moves on to Lydd ranges and then eventually the Eastern Rother Tidal Walls scheme at Rye. The latter is a long awaited phase that has been years in the planning and will bring the river wall on the east side of the River Rother up to the height (5.8m AOD) of that on the west side.