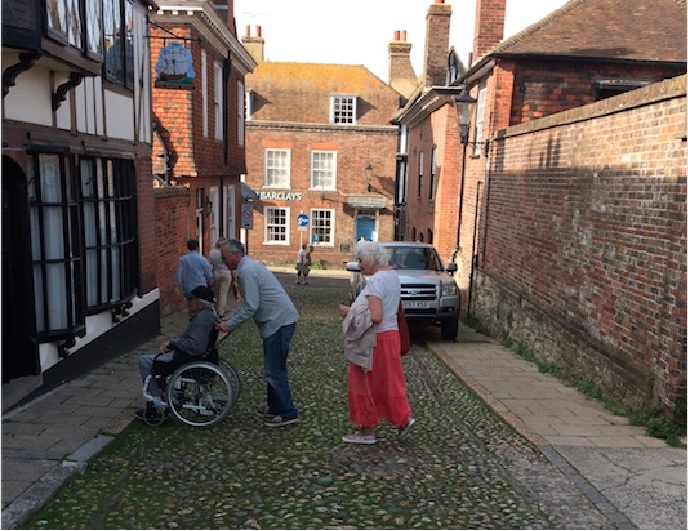 A cause dear to many Rye residents’ hearts was addressed when the Transport Select Committee recently published its report on pavement parking, calling on the government to stop stalling and introduce a ban.

The call is backed by Living Streets, the UK charity for everyday walking which campaigns for stronger, clearer laws on irresponsible parking.

Dr Rachel Lee from the charity went before the Transport Select Committee in June 2019 to give oral evidence on the impact on pedestrians of pavement parking in England, based on over 4,000 responses that the charity had received from supporters.

The main issues that emerged from the personal stories were the aggression, abuse, and in some cases violence, that pedestrians face from drivers who park irresponsibly.
Following the publication of the report, Stephen Edwards, policy and communications director, Living Streets said: “The government needs to act urgently on the findings of this report, which is founded on thorough investigation and input from the general public.

“Cars parked on pavements force people with wheelchairs, parents with buggies and those living with sight loss into the carriageway and oncoming traffic. The committee is right to draw attention to the impact of pavement parking on loneliness. Many older adults we speak to feel stuck in their homes because they’re not able to navigate their local pavements. People continue to be put at risk of injury and isolation with every day of inaction that passes.”

Parking on pavements is currently covered by criminal and civil law, with different rules in different parts of the country, and vastly different experiences of enforcement from district to district. The laws are confusing with research from the Guide Dogs for the Blind Association finding that just 5 per cent of drivers know all aspects of current law on pavement parking.

Meanwhile the Scottish government is leading the way with the Transport (Scotland) Bill which bans pavement parking, and the Welsh government has set up a task force to examine the problem.