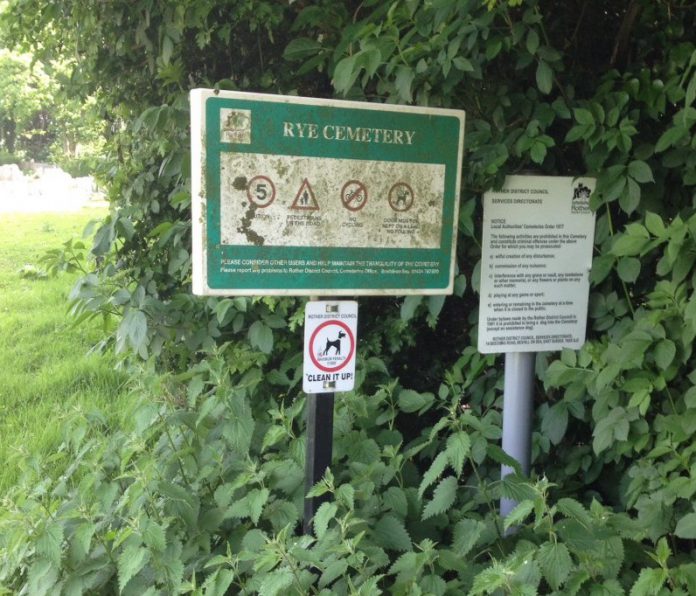 A widow has accused Rother District Council of neglecting Rye’s cemetery and leaving it an “utter disgrace”. Elizabeth Stevens, who regularly visits the cemetery to tend the grave of her husband John, said areas of the cemetery are overgrown and weeds are left to grow up against headstones. She added that she asked the contractors, when they were cutting the grass outside her house, if they were contracted to look after the cemetery and they said “Yes. We were there just over a week ago” but she told us that she would like to know what they had actually done.

“I’m sure it’s a cost issue, but this wouldn’t happen at Bexhill cemetery because Rye is always being pushed into the background” she said, adding that she was so fed up with the situation that she had contacted Rye Town Council and spoken to the Mayor, who had promised to speak to Rother directly.

It is not the first time Rother has been at the centre of controversy over Rye cemetery. In 2003, there was fury when it was accused of desecrating graves after pulling down 122 memorial stones. Some elderly people were left in tears after finding that their loved one’s memorials had been uprooted without them being informed and in 2014 the council was branded a “disgrace” for leaving fallen trees blocking grave plots and memorials.

I raised the issue at the meeting of CFAiR (the Campaign for action in Rye) in my role as Chair of Tilling Green Residents Association and said the cemetery looked as though it had been hit by a hurricane (after a recent visit to a family grave). CFAiR members agreed it should be a priority, that the issue should be raised with Rye Town Council and consideration should be given as to who might look after the cemetery better.

Mrs Stevens contacted Rother on May 2 and was promised a phone call back.  She has not received this at the time of writing.