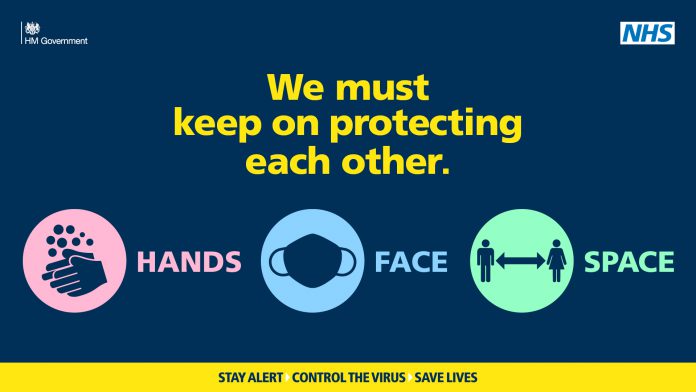 When the prime minister announced the government’s roadmap for the easing of lockdown measures last week, he emphasised the word “cautiously” to describe the route to 21 June. He was preparing us for the possibility of having to reverse the process if infections rise in any particular areas.

This caution was underscored this week by the chief medical officer, who made clear that moving out of lockdown any faster would mean acting before we know the impact of each step, which would increase the risk of us having to reverse course and re-impose restrictions.

Therefore, whether or not you have had one or more of the Covid-19 jabs, it is important to take care to keep up the three basic mitigations: Hands, Face and Space

We are almost one year on from the first lockdown and the establishment of Rye Mutual Aid. Cases of infection started to appear locally soon afterwards. Then, as now, sunshine heralded the early start of spring, tempting people to be out and about.

Despite the current guidance to stay local there are already signs, particularly from coastal areas, that some are venturing much further. The March socialising rules of the road map – 8 March: two people from different households; 29 March: rule of six – are going to be a challenge, but if we want to keep moving forward then it is important that the road map of measures is carefully observed.

This week the government has reported developments of the new variants of virus. “We know that Covid-19, like other viruses, can change or mutate over time. This has led to different strains of the virus with different characteristics.

There are now reports of three main variants of virus circulating in UK: the UK (Kent), the South African and the Brazilian strains. Of the three, the Brazil strain is considered more transmissible and somewhat better at evading neutralising antibodies.

The Brazil virus is now in the UK – reported to be in the south east – and work is under way to determine the efficacy of vaccines against these new variants and whether alternative vaccine or further boosters will be necessary later. Expect to hear more about this over the coming days.

For Rye and district, the programme of Covid-19 vaccination moves on to provide everyone over age 50, front-line health and care workers, and those with certain underlying health conditions their first dose of the vaccine by mid-April. The current programme also includes carers, care workers and those with profound learning difficulties.

However, the government has agreed that no occupations will be prioritised. It has concluded that the most effective way to prevent death and hospital admission is to carry on prioritising people by age:

“The vaccination programme is a huge success and continuing the age-based rollout will provide the greatest benefit in the shortest time, including to those in occupations at a higher risk of exposure. The evidence is clear that the risk of hospitalisation and death increases with age.”

Public Health England has sent reassuring messages that one dose of the Pfizer-BioNTech vaccine reduces hospitalisations and deaths by around 80% for the over 80s. Analysis of the AstraZeneca vaccine efficacy continues, with promising early results. It is clear that two doses of the type of vaccines available locally do work. Therefore with reports of some people declining the vaccine, everyone is encouraged to take the jab.

Discussions continue about “vaccine passports”, more sophisticated than the hand written cards issues by vaccination centres, to meet travel and other access requirements. The concept of a requirement to reveal this sort of personal data for some in UK is opposed and no government decision has been taken. But, internationally, plans are already advanced for a digital record that can be accessed at borders to show vaccine records. The first studies are underway by Singapore Airlines.

News from the Sussex NHS

Every two weeks, the Sussex Clinical Commissioning Group (CCG) has a drop-in session for representatives in the community. These are valuable meetings and enable both the NHS to pass on detail about vaccinations and related issues as well as to receive feedback from those representing patients. At the meeting this week, there were many points of interest. The NHS:

Those who attended the meeting were left in no doubt that the route out of lockdown will be carefully monitored and cautious.

To remain safe, even after vaccination, everyone must follow the guidance and keep up with the NHS advice for mitigations. As a regional NHS chief nurse said this week: “we are not yet out of the woods”.