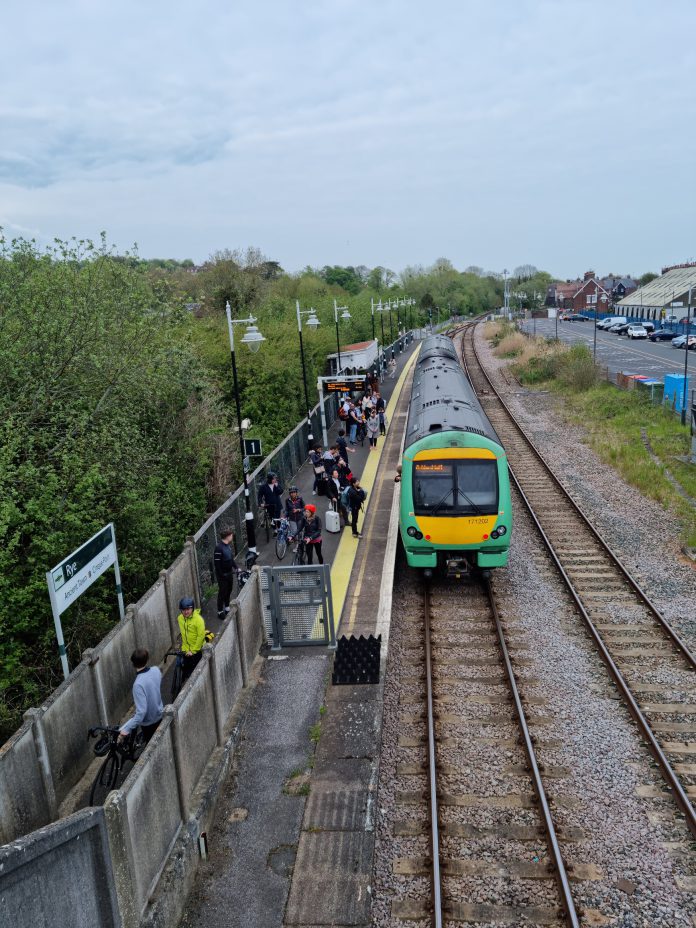 Last weekend was, predictably, very busy in Rye with all the events taking place in town (no doubt commented on elsewhere in this week’s Rye News) and these events attract many tourists, a significant percentage travelling by train.

Similarly, Hastings had lots of tourists for their traditional events over the long weekend with, also, a significant number travelling by train.

With this predictable demand along the MarshLink line in mind, in recent years Southern Rail has increased the capacity on the line during this and other particularly popular weekends: in previous years, on these days, the normal two car trains operating during weekdays were replaced with four car trains.

Coincidentally, over the last couple of years with Covid requiring social distancing on trains, we have become used to seeing most (but not all) services throughout the week operated by four car trains – and with this background we expected four car trains to be operating on the line last weekend.

But the first indication of a problem this Bank Holiday Monday morning was when reports were received that the MarshLink trains from Ashford were overcrowded and some passengers were being left behind at the station, unable to board.

Using available online data, MarshLink Action Group (MLAG) could see that we were being serviced on this day by one four car train and two two car trains. Inevitably there were going to be problems so, in the afternoon, we checked the situation at Rye station:

– The 16.48 service to Ashford was a four car train. Before it arrived there were approximately 120 passengers on the platform. When the train arrived, many passengers got off the train but there were still a significant number of passengers onboard.

All waiting passengers got onboard, but it took several minutes for the guard to cajole those onboard to move down the carriages into more cramped positions. So the end result was the service was heavily overcrowded (even in the back, 4th car);

– The 17.48 service to Ashford was a two car train. There were approximately 150 passengers waiting to board. Again, a lot of passengers got off but about 30 of those waiting couldn’t get on, despite the best efforts of the guard and there were questions from those left behind about what they could do to get home.

But the reality had to be explained that the MarshLink is an hourly service, the next train would also be a two car service (and who can guess how many more passengers would arrive for that) but the following service, in two hours time, would be a four car train. So that wasn’t very good news for the abandoned passengers or for Rye’s tourist trade.

MLAG (MarshLink Action Group) has discussed capacity issues on the MarshLink with Southern on many occasions and how they vary at different times of the year. But what is predictable (other than during the Covid period) is that tourist passenger numbers to Rye over the weekends of late spring/ all of the summer/ early autumn are enormous, particularly in good weather and at Bank Holidays.

It is for that reason it was easy to anticipate passengers would be stranded if all services were not four cars.

MLAG has reported the events of last Monday to Southern and we will discuss with them how this situation can be avoided in the future. We have also asked our contacts at Southern for any immediate comments they may have.