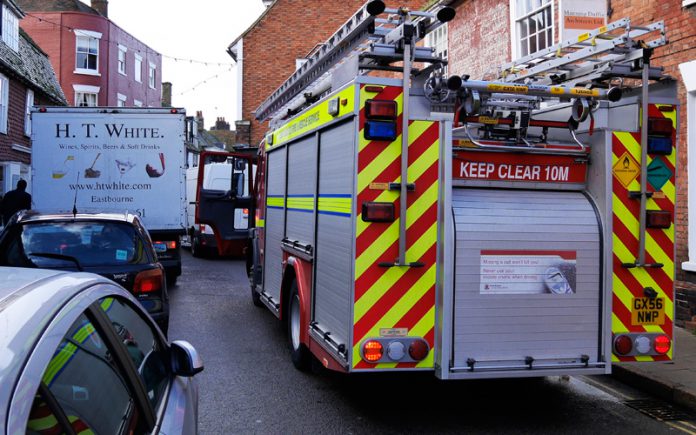 Parking chaos in Rye yet again halted the attempts of fire brigade teams to reach an emergency incident in the centre of town. Our photos clearly show the situation that confronted the leading tender. It could not budge in the one-way system and behind it traffic backed up down through the Landgate. Within that jam was a second fire crew.

The volunteer crew’s first obstacle last Tuesday was at the junction of Hilders Cliff with the east end of the High Street – but a parked van soon moved to make way. However, in less than 50 yards the fire crew was forced to stop in its tracks. Crew members jumped down and went forward to urge the drivers of vehicles blocking its progress at the junction with East Street to get out of the way.

In August two fire crews were also blocked as they made their way at night to an emergency alert from the Hope Anchor Hotel. Again Rye News had exclusive photos to show how illegally and irresponsibly parked vehicles, this time cars, could put lives and property at risk. There was a wringing of hands and Amber Rudd, the local MP, urged the funding of a traffic warden to police the town. But little has changed; indeed, if anything, it has worsened. In August, two routes were obstructed, each time by a single car. This week, as the photographs demonstrate, many more vehicles were involved.

In August Rudd wrote to:

She proposed that they considered a budget for a traffic warden. So far, in more than two months, the MP has received one reply: a letter from Johnston’s office at Rother. It says:

“Similar requests have come to the council in previous years from Bexhill, Battle and rural villages and the council has directed these requests for funding to the Safer Rother Partnership, who have funds to allocate around the district for tackling issues of anti-social behaviour, such as speeding through villages.”

The letter ends: “The current budget available per annum is £35,450 and the chairman of the committee is Cllr Robin Patten. This letter has therefore been passed to them for consideration.”

On Tuesday Rye News sent emails to Rudd, Bourne, Chief Insp Warren Franklin, the Rother District commander, and to East Sussex Fire & Rescue Service. The emails outlined the problems that confronted the firefighters and their fast response time – the emergency was timed at 9.09 am and by 09.15 the first of the two fire engines was already in the High Street. The email then asked:

“How much longer must Rye play Russian roulette with lives and property before strong action is taken to deal with the core issue: a lack of monitoring of traffic problems in the historic Citadel? These issues are not going to be solved at local level. They will be solved when there is pressure from senior members of our community, from your offices. It will take talking heads round a table, driven and focused on what will happen in Rye if they do not deliver. At that stage, fine speeches will not matter. Rye needs you to help it. It needs you to compel others to fund the action required.”

There was no response from Sussex Police and no response from Bourne, the elected Crime Commissioner. Borough Commander Paul Evans of East Sussex fire service commented: “It’s not uncommon for crews attending incidents to be slowed down or completely blocked out by cars parked either side of residential roads. Whilst firefighters recognise the difficulties residents have in finding suitable on-street parking in many areas this is an issue that has the potential to cost lives.”

The strongest response was from Amber Rudd: “It is clear that the current situation with illegally parked cars and the apparent lack of parking enforcement in Rye cannot continue. The events of this week, with a fire engine again unable to reach a potentially serious fire because of illegally parked vehicles, clearly signifying the need for prompt and proactive action. I have previously expressed the concerns of my constituents to both the police and the local authority and I shall continue to push for a solution. Please do join me at my Rye conference on Friday November 28 when we will be discussing local issues such as this and looking to ensure solutions are found.”

The fire on Tuesday at The Corner House shop was minor – wood ignited by a blowtorch during paint stripping – but it underlined a major issue. Ironically, Rye’s councillors will consider at their meeting on Monday a proposal to employ an odd-job man, to be known as a town steward – but not a traffic warden.

As a postscript: see our photo below. This time a charity vehicle is attempting to turn into the High Street on Thursday morning, when again there were were long jams stretching back to Tower Street. On this occasion two vans occasioned the frustration and the occasional hooting of a horn. Who would be better to clear up this mess in our town? An odd-job man or . . . All paths converge, except one

Rye News gets a boost

Brain games for self isolating