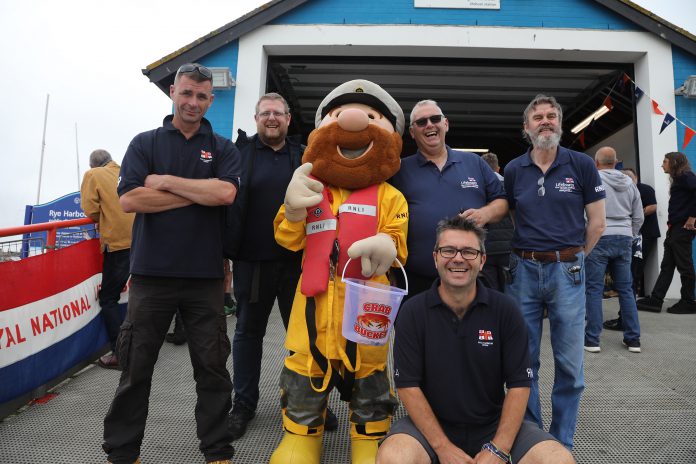 Tony Edwards, former Lifeboat Operations Manager of the station, cut a tape at 11am to kick off the proceedings. There were plenty of stalls for people to buy from and the raffle prizes were outstanding. Many thanks to all the local businesses and villages who donated so generously.

Stormy Stan (see photo) arrived in style in an open-top sports car, much to the delight of the crowds. Children were hopping about waiting to have their picture taken with him. Later Stormy Stan headed off into Rye, encouraging people to come and give their support: people loved it.

A highlight of the day was the arrival of the Morell, a Shannon-class lifeboat from Dungeness. The crowds were waving from the slipway as she arrived, escorted by Hello Herbie II, the Atlantic 85 Rye Harbour inshore lifeboat. Natalie, a navigator from Dungeness, commented: “We love supporting our flank station at Rye Harbour. It is always good to catch up and be part of such a fun day.”

Natalia and Charlotte Hayter enjoyed trying on the senior launchers’ helmets and their father said: “Seeing the Shannon up close was awesome for the girls. It was a pleasure to see the volunteer men and women of this charity on their Open Day and to give them the recognition that they deserve.”

There was a buzz about the place as people flocked through, buying raffle and tombola tickets, teas and coffees and cakes. Over £1,220 was raised  and Paul Bolton (Lifeboat Operations Manager) remarked as the event drew to a close: “I was proud of my team today as they all worked hard to make it a success. A lot of preparation goes in, long in advance of the day itself. A particular thank you to Mark Stephenson and his fund-raising team who did the organising, and all those who helped. We even managed to recruit some new crew-members. A great success all round.”