The Hastings Tapestry made in 1966 to commemorate the 900th anniversary of the Battle of Hastings is on show again this weekend in Rye on Saturday July 13 and Sunday July 14 between 11am and 3pm each day at Bridge Point Gallery in Rock Channel – but does it feature the “history” we want to remember?

The Bridge Point Gallery (shown below) is in the former Bournes warehouse in Rock Channel which can be reached from St Margaret’s Terrace off the main South Undercliff road along the quayside opposite the Simply Italian restaurant.

Entrance is free for those 26 and under and £3 for adults, and the tapestry is displayed in a theatrical setting with background sound and music and depicts other battles in the preceding 900 years of British history.

But is what was regarded as “important history” in 1966 still regarded as important today? and who decides what is “history”?

Wartime leader Winston Churchill (shown in the top photo) is probably closely associated with the Battle of Britain in 1940 fought in the skies overhead, mainly in Kent and Sussex, and for the recently celebrated 75th anniversary of the D-Day invasion of Europe in June 1944.

In Rye, however, 75 years ago houses were being shaken, with some damage done, by hundreds of anti-aircraft guns trying to shoot down hundreds of doddlebugs (V1 rockets which would probably be described as cruise missiles today) heading for London – and the only “invasion forces” locally were mainly dummies to fool the Germans waiting in Calais.

And Rye was very much in the middle of those air battles in 1940 and 1944 because it is in the front line for invasions, and has been since 1066 – with the Romans before that. 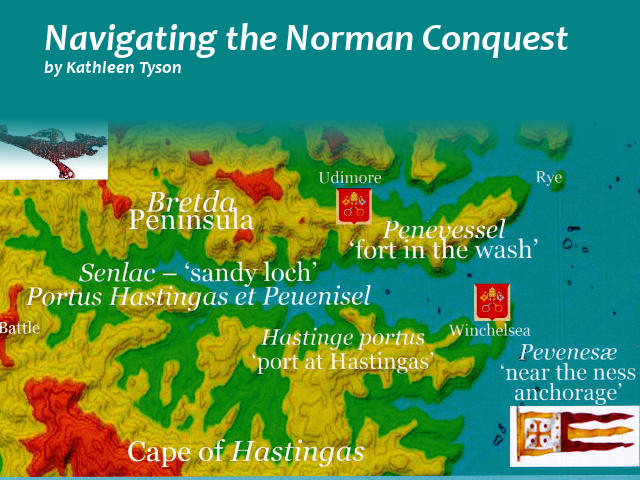 But it was a very different coastline in 1066 as the sea came many miles inland, particularly along the Rother and Brede valleys. In those days the Isle of Oxney was very definitely an island – and so was Rye at high tide, though a causeway linked it at low tide to Rye Hill.

The valleys then were open to the sea and in Rye’s Castle Museum you can see a large model showing the changing coastline, as well as today’s coastline which roughly follows a historic line of sand bars and shingle banks which ran from Hythe to Hastings in Roman times.

And the same room in the museum also displays a model of Sir Francis Drake’s ship which just popped into Rye during the fight against the Spanish fleet in Queen Elizabeth the First’s reign (to stop their planned invasion) to drop off a noble Spanish prisoner who, in time, would yield a hefty ransom.

But in 1066 Rye itself was part of the coastline, protected in part by those sand bars and shingle beaches, particularly in the Lydd/Dungeness area – and the ships then were even smaller than Drake’s ship (pictured below) and very similar to the Viking ships you may have seen in films.

And those small, shallow ships may have sailed (as quickly as possible) across the open sea, but they relied just as much on the oarsmen rowing the boats up the nearest estuaries – like the Brede and Rother – and into land owned then by the Abbey of Fecamp (which built Rye’s Norman church St Mary’s).

And abbeys in those days were often important as both watchtowers looking out to sea (as the view from St Mary’s below shows) and as landmarks (sometimes lit by torches) for those out at sea.

The impressive view from St Mary’s tower goes far out to sea – even now. So there were good practical reasons for building the then highly visible Battle Abbey where it was, but no archaeological evidence has been found to prove that was the actual spot where the Battle of Hastings was actually fought – rather than the site where the monks wanted to build it.

Rye’s Museum had an interesting  talk recently about the Battle of Hastings when the speaker suggested it might have taken place in the Brede Valley, rather than Battle itself, because the landscape was very different then.

Indeed, if you catch the train from Hastings to Rye, in 1066, you would have seen the Brede Valley in front of you full of seawater, which then opened out into a wide sheltered basin between Udimore and Icklesham protected by the cliffs around Winchelsea and at Cadborough.

And some centuries later in Tudor times you would have found the English fleet (still quite small, shallow boats) at anchor between Rye and the sheltering sandspit on which the Tudor Camber Castle was built.

In Saxon times however the suggestion (made in the recent talk) is that the Norman fleet first anchored in shelter near Dungeness or Lydd, while they waited for the tide to change before rowing up the Brede at high tide to disembark near Icklesham before marching to battle.

Saxon King Harold in the meantime would be coming along the Roman road (now the B2244) from Hawkhurst to cross the Rother (probably at its highest navigable and tidal point) where Bodiam Castle was later built.

And the battle could have taken place anywhere in the upper Brede Valley, including Battle. But history is often written well after the event, usually by the victors, and that does not mean it is always accurate. The Russian view of D-day, for example, is slightly different from ours!

One thing is sure though. Rye is full of history, as it is a popular invasion point, and in 1940 Hitler planned to land and then move the 60th Infantry Regiment up from Pett Level towards Icklesham and along that ridge towards Doleham, while a panzer regiment of tanks moved up the opposite ridge through Udimore and Broad Oak, and a mountain regiment landed at Fairlight, climbed the cliffs and then moved up past Battle to the Roman Road.

But the invasion never happened in 1940, as it did not either in Napoleonic times (1800s) when the Royal Military Canal was constructed along the old line of cliffs from Hythe along to Rye and on past Winchelsea to Pett Level, in order to move troops around rapidly if the French did land.

So, enjoy the tapestry, if you have not seen it yet, and visit Rye’s museum (as it is always getting new exhibits like a model of Drake’s ship (below), but always remember that history is only as good, or as bad, as the person who wrote it!