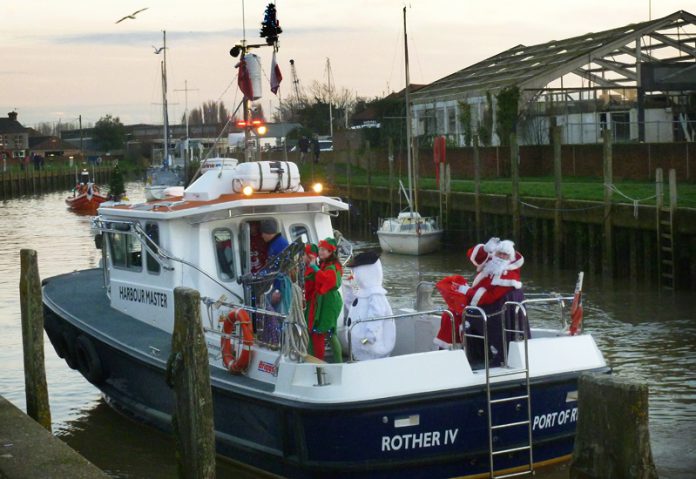 Hundreds of people gathered to mark Father Christmas’s second visit to Rye in a week, on December 13. This time Santa was given a lift along the river in the Harbour Master’s launch, leading a small flotilla and heralded by a contingent of disturbed ducks. He looked slightly different from last week’s incarnation, though the elves and snowman were definitely the same as those that paraded with Santa’s Rolls-Royce the previous Saturday.

There were a handful of stalls selling refreshments and the Rye Ukelele Experiment did its usual excellent job of spreading Christmas cheer and raising money for St Michael’s Hospice. Father Christmas made sure to greet all the excited children personally, before being whisked off to his next engagement in a Land Rover. In keeping with tradition though, Rudolph was driving.

In previous years, the Christmas activities have all taken place on the same day, ensuring an action-packed series of events, including the arrival  of Santa by boat, his triumphant parade through the town, the market on Strand Quay and the grotto at the museum. This year though, the decision to string them out over three weekends has left gaping holes in the schedule, leading to spectators disappearing quickly and shops that were emptier than they should have been. The organised festivities left one town councillor describing the overall experience as “underwhelming”.