Following on from Rye News’ recent article, on the fact that Natural England’s Coast Path will be bypassing Rye, at a recent Rye Town Council meeting Councillor Chris Hoggart spoke up on the importance of continuing the coast path through Rye. The coast path will form a national trail around the country and he believes it will attract walkers and ramblers to Rye that would in turn support local businesses.

Councillor Hoggart stressed that Rye is in a unique position because it is where five long distance trails and paths (see below) converge and he is drafting a response to Natural England on behalf of the town council in support of continuing the path through Rye.

In a recent conversation with Rye News, Councillor Hoggart expressed surprise that the coast path was avoiding Rye altogether. Until recently he had worked at Natural England and had presented to the town council and told them that the path would be passing through Rye. Since then Natural England has reneged on this decision and he explained that it is rare for this nationally significant path to have such a break in its route.

Promoting Rye to walkers and ramblers is listed as an aspiration in the recently agreed Rye Neighbourhood Plan under its ‘Green Tourism’ strand. This is in recognition that from Rye you can access an abundance of walks through beautiful open countryside and  easy access to the coast. In addition, Rye is, in turn, easily accessible by public transport.

There are two main obstacles blocking the coast path’s way through Rye:

Walkers along the river Rother to Camber Sands have recently noticed a number of new additions. Rye Golf Club have installed people counters to measure the number of people walking on the old Tramway path that leads to the Harbour Master’s building and onward to Camber Sands. Following a Rye News enquiry, Rye Golf Club said, “There is a strong likelihood that any such imposing of the pathway across our golf course would result in a significant increase in footfall which in turn could seriously impact the ability to retain a number of golf holes because of health and safety. We continue to reserve the right to review the use of the permissive path.”

In their consultation document Natural England had claimed Rye Golf Club were opposed to the coast path running along the old Tramway path because they felt it would encourage more walkers alongside the golf course and in turn disturb the golfers. In a response to Rye News the golf club said, “We are reviewing our option to rebut a suggestion from England Coastal Pathway (ECP) and Natural England to install a coastal pathway through and across the golf course and our land.”

Following a site visit to the golf course, and after studying Ordnance Survey (OS) maps, it is curious that there are already two rights of way that go right across the golf course (see map below) but the Tramway path, used most by walkers, is not one of them and is classed as a ‘permissive pathway.’

Paths marked rights of way give walkers the legal right to access the land. In addition to rights of way there is what are known as “permissive and licensed paths” – this gives walkers the right to follow a path at the landowners discretion, which can be revoked. Rye News has been in contact with Rye Golf Club and will publish their response in full next week, subject to their approval.

In the event that Rye Golf Club stop walkers from using the old Tramway path, walkers will be in a peculiar position. On paper, ie on OS maps (see map), there is an public right of way that runs for 200m parallel to the Tramway path but, on investigation, there is no longer a path across the marsh land, which not only floods on a regular basis but is dissected by deep impassable gullies. 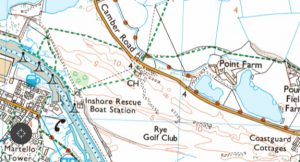 A sign at the start of this section informs walkers of the possibility of following an alternative route via the Tramway path and states ‘Licensed alternative route for use in times of flooding. Persons using this path do by licence of Rye Golf Club Ltd.’ What the notice doesn’t say is that the right of way path is impassable even at low tide so it begs the question, as the golf club’s route is the only viable option, but could be closed by the landowner, why has ESCC not looked after the original right of way to Camber Sands?

Rye News has contacted the rights of way team at ESCC to enquire how this has been allowed to happen, but at the time of publication have yet to receive a response. When we receive the response we will publish it in full.

2) Rye Harbour Road junction with the A259

The primary reason given by Natural England as to why the proposed coast path will not pass through Rye is the dangerous A259 and Harbour Road junction.

While the roads are operated by different authorities (the A259 is managed by Highways England and Harbour Road by ESCC) Rye News has contacted ESCC leader, and Rye’s representative on the council, Keith Glazier, to inquire what action ESCC is taking, in conjunction with Highways England, to make that junction safe for residents and walkers alike.

Installing traffic lights at the junction would seem to be the most preferable solution, especially as more traffic will be using the junction on the completion of the Discovery Centre at the Rye Harbour Nature Reserve. We will publish his response once it has been received.

Despite numerous assurances, policies and aspirations to promote sustainable transport, in a further twist to this story, local groups across East Sussex recently expressed outrage when ESCC diverted £5 million of public funding previously allocated to local cycling and walking schemes.

This led to local cycling and walking groups launching a petition demanding that ESCC reinstate the £5 million of walking and cycling funding, ‘in the light of local councils committing to carbon reduction targets and a shift to active travel.’

If ESCC is serious about public safety, while also encouraging more people to walk as a form of exercise, then they need to tackle the barriers that they themselves have created.

The deadline for submitting comments to Natural England has been extended in light of Covid-19. The original date to submit an objection (if you are a landowner that will be affected) or make a representation (if you are a local group or individual) was 23 April 2020. Natural England have not published their new deadline, but you can read their advice on how to submit your comments here.

If you are interested to see the rights of way in and around Rye, click here for ESCC’s map.